Appendix N and the Scifi/Fantasy written classics have become a frequent topic here, and I’ve been adding more diabolical texts to my growing list. At this point it’s becoming something of a behemoth, crying out for formal compilation.

So far in addition to the Necronomicon, we’ve got the grisly lists of literary inspiration for “Moldvay Basic” and Traveller, and the Ballantine Adult Fantasy series. I’m sure more forbidden knowledge will be revealed to me in time, but for the moment I wanted to share a collection I’ve been gradually working my way through for a couple of months now – Tales Before Narnia: The Roots of Modern Fantasy and Science Fiction. 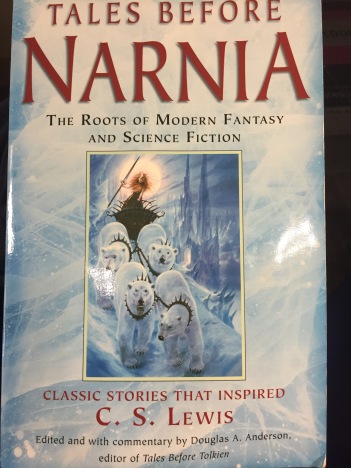 Douglas Anderson (editor of Tales Before Tolkien, another one I’ll have to check out) put together a number of stories and folk tales that were known to have influenced the writings of C.S. Lewis. While the list includes contemporaries of his like Tolkien and Barfield, is also goes back quite a ways to the likes of Charles Dickens and Sir Walter Scott. Incidentally I just picked up a copy of Ivanhoe the other day to tack onto the tail end of my reading queue.

Each story is prefaced by a short introduction penned by Anderson, relating some notes on the author and/or story in relation to Lewis, often mentioning Lewis’ comments on said work. Quite interesting!

One of the things I love about SFF is its foundation in myth and legend and folktale. Going back to older literature and stories rooted in oral tradition can be a mentally taxing affair when your mind isn’t acclimated to older writing styles, but the payoff is great. Just as modern writers borrow and steal and modify from works past, so have those older creators drawn upon the stories of their own times and prior. Man is an imaginative creature who has been dreaming of heroes and maidens and dragons and the stars long before the formal emergence of SFF.

For the time being I’m throwing a little Offutt into my rotation (whom I added to my queue based on reviews from Cirsova and Jeffro without even realizing he was an Appendix N member). Woot for that. As an aside, though I’m heading down this dark, winding path because of my love of SFF, I also do like a good list and a good check mark. I can’t deny my own perverse satisfaction at ticking off “Offutt,” even if the real pleasure is in the reading and I do intend to seek out more of his imaginings.

Another incidental matter – I’m becoming acquainted with more thrift stores and second-hand shops in my area, which I think is a good thing. I’m going to need more room for book-stacks, though.

7 thoughts on “Taking a (SFF) step back”