For the month of October, I mostly opted to play follow the leader – dashing through Nine Princes in Amber with the Puppy of the Month Club, and Frankenstein in solidarity with HP over at Every Day Should Be Tuesday.

There are already a number of great Amber posts up, so feel free to check those out if you’re familiar with the story already and looking for some analysis:

Hooc Ott laid down a fascinating look at Amber’s influence on a classic D&D campaign module.

Jon M’s overview is worth a read. He makes some astute observations about the tone and setting of the story, and I’m in full agreement on how it concludes. It doesn’t feel like a good place to end, and while I generally prefer novellas to lengthy tomes, had I been reading Amber as it was written I’d have been disappointed.

The Frisky Pagan also makes some good points. I found myself nodding along to his opinion about the highs and lows of the first Amber tale. The invasion of Amber did seem anticlimactic and relatively dull compared to the character-building periods like Corwin’s imprisonment.

As I read the story myself, I found myself thinking about an exchange I had with Alex of Cirsova on Twitter: 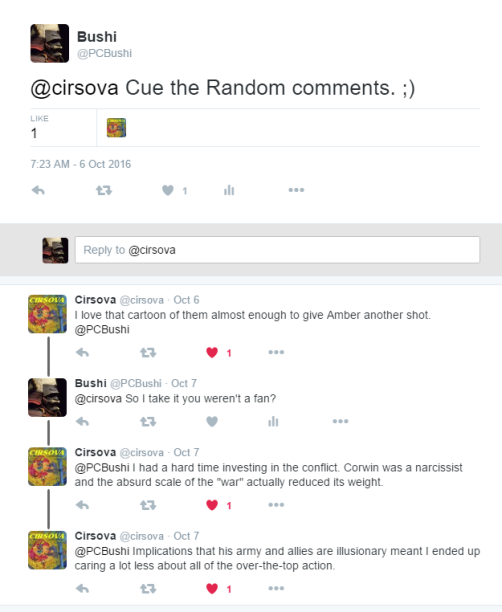 As to his distaste for Corwin, I didn’t share the feeling but I can definitely see where he’s coming from. As the book advances, Corwin demonstrates admirable feelings like remorse, pity, and guilt. He may be a narcissist, but I didn’t find him consistently unlikable.

Alex’s second grievance gave me more pause (incidentally he also observed at the PotM Club blog that Amber’s shadowstuff was one of the main inspirations for D&D’s illusionist class).  I haven’t read past the first book, so I could be completely off-base here and contradicted by the succeeding stories, but my impression was that the Shadows were more than illusions.

So far as the children of Oberon believe, Amber is the only Substance; all else is Shadow. However it also appears that the people of Amber do not know everything about their world or how their powers work. They seem to speculate and take for granted.

Furthermore, Corwin feels sympathy for his Shadows. When he and Bleys move against Eric, our protagonist notes his pity for their dying, suffering soldiers. When faced with his inevitable defeat at sea, Corwin even decides that though he would personally never choose to surrender, he would give himself up to save his men. If these devotees were mere dust, only illusion, then why would he do such a thing (especially seeing as he clearly values himself so highly)? Is this nothing more than the sympathy one might feel for a video game avatar or maybe even a pet? Possible, but doubtful to me. Feelings of human decency might compel me not to beat a hooker to death in GTA, but they would not make me sacrifice in real life for said digital prostitute.

Even if Corwin doesn’t consciously realize it, I think he knows that the people of the Shadows are more than nothing. Perhaps this is a result of having lived on our Earth for some centuries. That, too, raises an interesting point. If the Shadow worlds are just reflections of Amber, devoid of any substance, then we too are nothing.

Again, I could be completely off the mark here. I’ll pick Amber back up sometime and see what else is said of the Shadow. But I want to give Zelazny credit here and believe that #ShadowLivesMatter, too. Otherwise, as Alex says, there are some big elements rendered meaningless.

9 thoughts on “Shadows and dust of Amber”