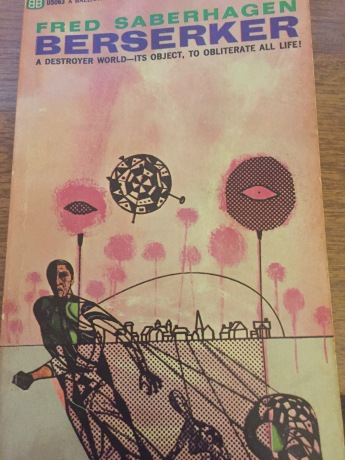 I wrote a little about Berserker last week. Though the series isn’t specifically name-dropped in Appendix N (Saberhagen does get an “et al,”), I thought it was quite good and a spiffy intro to his stuff. My enjoyment of the first installment may have contributed to my Black Friday purchasing decisions (Changeling Earth and the Complete Book of Swords are other Saberhagen works). 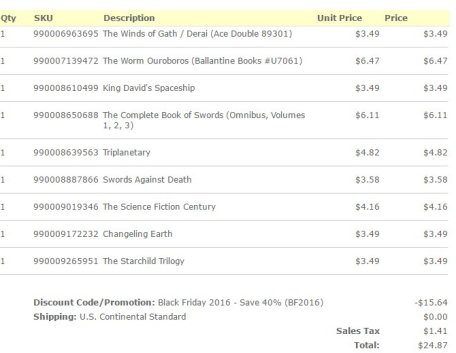 Last time I said this of Berserker:

So far, this is a collection of short stories about Man’s war against a fleet (?) of semi-autonomous, intelligent, world-sized machines that fly around in space trying to exterminate all life. These machines, known as berserkers, are clever, cruel, and unpredictable, and seem to have been unleashed upon the universe by a race of militant conquerors. And humans are the only space-faring race with the nads to put up a fight. Great stuff. So far the stories remind me a bit of Asimov’s Foundation stories, with more action. Each one features a human or humans pitted up against the dreaded berserkers. So far the humans always prevail in some way – by outwitting the machines, defeating them by sheer determination, or perhaps being strategically spared only to kindle a resolve to FIGHT.

Saberhagen didn’t take a lot of time to develop particularly deep characters across the book, which isn’t surprising given the short story format. Still, characters are varied enough and you do see a few carryovers. Hemphill is a reliable and pragmatic solider, and steady if not especially likable. Mitch Spain, the part-time writer, part-time marine, also does a serviceable job as one of the generic, heroic, fighting men of Mars. Then you’ve got Johann Karlsen – berserker’s bane and warrior saint; best hope of humanity against the killer robots.

The main draw of the berserker stories is seeing Saberhagen’s different takes on the central theme of man against machine. In many cases, men manage to outwit the berserkers. The entry story provides just such an example – with the protagonist doing a bit of quick thinking and throwing together an improvised system to trick the berserker into thinking its mind-ray is ineffective, buying the humans the time they need for their third attack ship to arrive. The last story bookends perfectly on that theme, with Karlsen coming chillingly close to death but being shrewd enough to test his rescuers before admitting them into his pod. 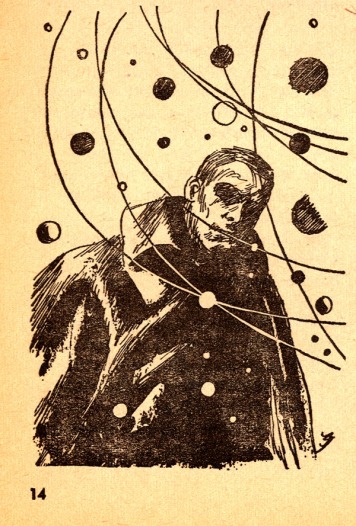 Not all of the tales highlight the courage or wisdom of humanity. Some show the darker side of man. One such story (which was perhaps more on the boundary), follows a man dubbed “Goodlife,” who was raised and brainwashed by a berserker to serve as a repair tech. Even he, though, a pitiful coward and collaborator, ends up ultimately striking a blow for humanity.

I did think there were a couple of weaker stories. I didn’t particularly care for the story about the Jester. Writers like to experiment – I know this and I appreciate it. But the humorous tone of this one story was out of key and clashed with the overall feel of the book. The idea of a harmless berserker, ignorant of the meanings of “life” or how to destroy it was an amusing one, but the image of berserker robots slipping on banana peels and hurling fruit and pies just wasn’t in keeping with the idea of humanity engaged in a deadly war for survival against terrible alien machines.

The story of the shepherd boy accidentally saving his planet by stumbling upon a planetary defense console as a berserker was in the process of launching an attack was also a little bland. Much more enjoyable were the stories of human determination, courage, and cleverness.

The berserker machines themselves were pretty consistently well done. Early on in the book, Saberhagen presents a chilling description of their voices – words strung together from the recordings of captured humans, frequently changing in pitch. The berserkers are cold and calculating. They use cruelty as a tool but prefer to kill quickly and efficiently when they can. They experiment and test their enemies, sometimes taking prisoners for various reasons, and sometimes letting humans go when they calculate it will serve their purposes (such as spreading a disease or undermining the human cause against the berserkers). I found them to be consistently interesting and menacing foes.

Sabgerhagen’s berserker machines are an early speculative example of the “von Neumann probe” – a spacecraft capable of self-replication. They possess automated shipyards for creating more of their kind, and are shown to gather resources for self-repair. Scary stuff.

Berserker was a very cool book and a pretty easy read, and one I’d definitely recommend to scifi fans.