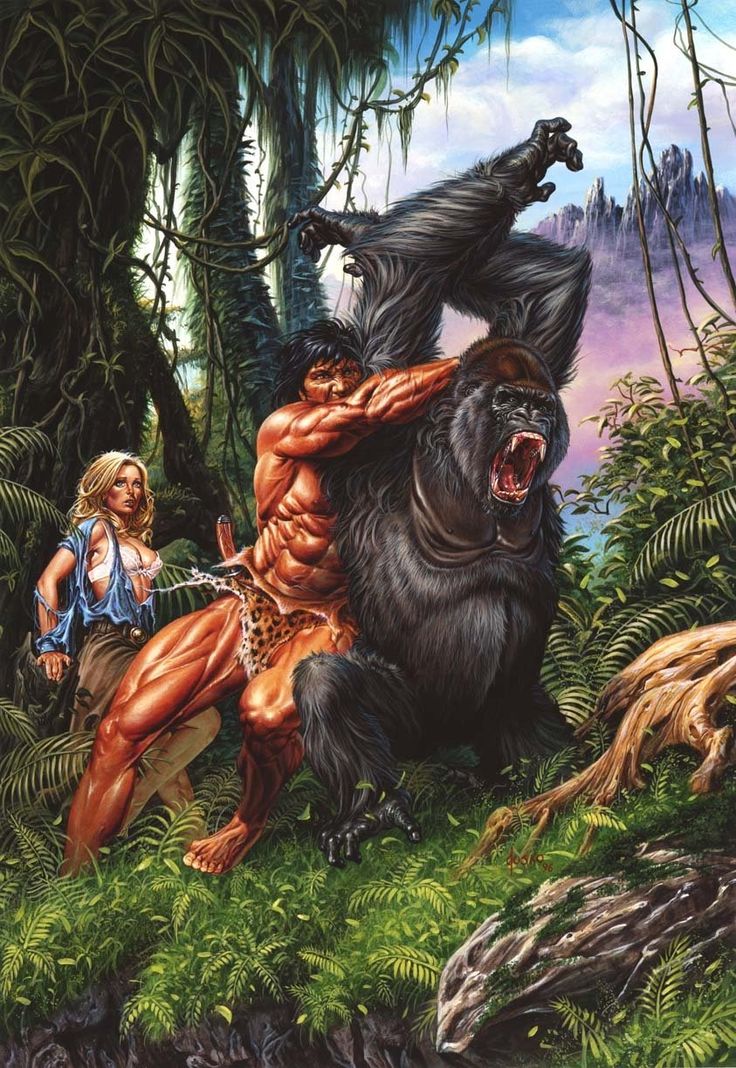 I recently finished up reading Tarzan of the Apes, because I could no longer respect myself as an Appendix N/old school SFF blogger who hadn’t done so yet (though it may be worth noting that Tarzan isn’t actually Appendix N). I’ve been meaning to write sooner, but my flesh husk has been busy regenerating from a viral plague, among other preoccupations, some of which might involve simulated trucks.

At the risk of becoming the one PulpRev-oriented site that speaks occasionally unflatteringly and repeatedly of Edgar Rice Burroughs, Tarzan was okay.

I’ve never been big on jungle adventures, honestly. The Solomon Kane tales that did were excellent because Robert E. Howard is a baller. Seriously, if you haven’t read any of the Kane stories, you should. It’s arguably some of his best stuff – even better than Conan.

But the Jungle Book media that I’ve consumed never impressed me, and I’ve never found King Kong (I know, it doesn’t all take place there) to be particularly interesting.

If you’ve never read it, your image of Tarzan, shaped by clips of old black and white films, the Disney animation, and parodies like George of the Jungle, probably amounts to an adult Mowgli-type dude who was raised by gorillas and swings around on tree vines yodeling.

As is the case with Frankenstein and probably numerous other classics, the modern perception is far removed from the reality of the character.

For one thing, the apes that raised Tarzan aren’t gorillas. They are more intelligent (even having a primitive vocal language of their own) and distinct from the other apes of the jungle.

Tarzan himself may owe a spark of inspiration to Mowgli, but the character is basically a superhero, and I think it helps to think of many of ERB’s protagonists in this way. Tarzan is incredibly strong and adaptable, possessed of superior intellect, and is both primal and cultured. It takes him mere weeks or months to go from a savage ape-man to a European gentleman in speech and manner.

Also, Tarzan does not yodel when he swings around. He gives a ferocious cry after making a kill.

I grew to like the Tarzan character. My main complaints with the story aren’t with him, for the most part. I do think he’s a little too perfect, but again, if you think of him as a proto-Superman (similar to John Carter in some ways), this is fine.

Mostly I found almost all of the supporting characters to be unbelievable and irksome. Tarzan’s French captain companion isn’t bad. He serves his purpose as Tarzan’s main gateway to civilization and the world of Man, building upon the groundwork laid by the cabin of Tarzan’s father.

The hero’s cousin, Clayton, is also a fine man and a decent character. This presents its own problems. Namely, Clayton is a rival for Jane’s affections and for Tarzan’s title and inheritance. This sets up Tarzan to be noble and self-sacrificing, but it’s also a somewhat uncomfortable feeling for the reader (or at least for me). Clayton is shown to be handsome, brave, and noble. But he’s also an obstacle for the hero.

I don’t intend to read the sequel, so I read the plot synopsis for the Return of Tarzan and I see that ERB deals with this by changing Clayton and making him a coward. This enables Jane to break off their engagement because he is now a cad. Poor Clayton. It would have been better for him had he died in the jungle, it seems. But oh well – Jane has to end up with Tarzan somehow, and we can’t have anyone feeling guilty on Clayton’s account!

Before we get to Jane, her father and his companion are almost insufferable. Wandering into the jungle for no reason, arguing academic and philosophic points while being chased by a predatory cat and then rescued by Tarzan, and then refusing to follow him: perhaps these antics were meant to be comical, but I just found them exasperating.

As for Jane, I agree with my friend Alex of Cirsova, who commented that she is the worst of the ERB women. She is alternatingly indecisive and rash, as well as fickle. Jane is part of the reason Clayton doesn’t work as well as he could have. At the start of the story, the two are taken with one another. And why not? She’s pretty, and he’s a handsome, brave, virtuous, rich British noble. But as soon as she gets a look at Tarzan, she’s instantly over Clayton and smitten with our jungle god. Because man is he hawt.

This may cut close to reality, and we pulp fans do like our alpha males who take what they want. But it reflects poorly on Jane, I think. Clayton is a fine, upstanding man whose only demerit here is that he’s not an exotic demigod. He’s a likable character and he’s just been spurned by the female lead for purely superficial reasons. Understandable, perhaps, and realistic, sure. But not very admirable.

Besides this, at least in the first book Jane doesn’t really show any of the fierceness (or of course loyalty) that Dejah Thoris and even Dian of Pellucidar do.

A couple things in the book’s favor – ERB was masterful at both action and at hitting certain emotional beats (that he seems to hit in every story, but they keep working!). The same is true in Tarzan. There’s some epic action, and some gripping feelzy moments. I especially liked the story of Tarzan’s parents.

So it was an enjoyable read. I’m glad I read it. But I don’t really feel much desire to continue with the series. I’ve still got a bunch of Barsoom waiting for me!