My first exposure to Gordon R. Dickson came through his fantasy title The Dragon and the George – a quite exciting tale of a modern, mundane man thrust into a medieval fantasy world. It’s been done many times, but in this case our protagonist finds himself in the body of a dragon. Great book!

At the time of that post I was doing a bit of light research, as I am apt to do, and found that Dickson was more recognized and lauded as a scifi writer. Since then I’ve read Mission to Universe; it was okay.

His Childe Cycle is supposedly where it’s really at. Perhaps.

I just finished reading Dorsai!, and it was pretty good. I feel disgusting placing a comma next to an exclamation point, but here we are. Before getting into specifics, I think we’ve got another solid 3.5-4 out of 5 in this one. I got through it quicker than the last one (Lest Darkness Fall) and I daresay I enjoyed it more, but it didn’t blow me away. 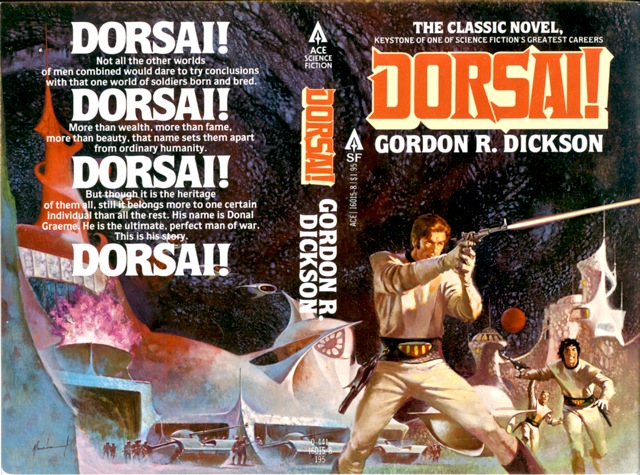 Dorsai! is the first book (in publication order) of Dickson’s uncompleted Childe Cycle – a story meant to span a millennium, from the 14th to 24th centuries. At the time of Dorsai!, humanity has expanded to the stars and begun to diverge. While there are not (yet) any branches of the species, planets have specialized. The titular planet of the Dorsai, for example, is a society of elite fighting men. Most of the worlds’ commanders and the best troops available hail from the warrior planet.

The story focuses on one Donal Graeme, a Dorsai who has just reached adulthood. Of course there is something “odd” about him; everyone says so. As the story progresses, we follow his career and meteoric rise through the ranks. Obviously the guy is a genius! His true motivation is somewhat obscured, though revealed to us and to himself in a vague, slow-drip kind of way, until the end of the tale.

Dickson does a nice job blending action and strategy (both military and political). I was reminded a little  of Ender’s Game and Foundation, in the satisfaction derived from following as Donal devises and executes an unlikely plan or figures out something no one else sees.

His world building was also quite well-done on a macro level, I thought. By the end of the novel I felt like I had a pretty decent picture of the worlds of Man and how they interacted with one another.

Bottom Line: If you see this one in a secondhand bookstore, pick it up. It’s good, inspirational, classic military scifi.

All that said…I think Dickson wrote a decent-good book that could have been great. I think he wound up bogging himself down with Big Ideas and fantastical elements that got no follow-through. Character development was weakish. Anea, Lee, Galt, ArDell Montor, William, and even Donal himself fall all prey here. We get glimpses into personality and motivation, but that’s about it. Donal’s uncle Ian felt to me like perhaps the closest thing to a whole character, but he didn’t really get any kind of an arc.

There is a part where Donal is told that he is special in some way and that he can walk on air if he believes he can. He proceeds to do so, but then dismisses this unexplained power and never makes use of it again. This thread is just kind of lost. What was the point?

At the end of the story, Donal explains that he has a superhuman sense of insight – that he can see how events will unfold: sort of a quasi-Muad’dib prescience, I suppose. He is a sort of unforeseen evolution (as opposed to Dune‘s Paul, who was the result of carefully planned breeding come to fruition sooner than expected).

This is all well and good, but the dialogue and explanations between Donal and Sayona felt excessive. To know that Anea was designed to gravitate to the most powerful man of humanity is enough. To know that Donal’s a superman who can predict the future is enough. Too much exposition!

There were several discussions throughout the story about the economy of the worlds. While I did find the idea intriguing – that because planets specialize they must trade and contract men and women of different specialties from other societies, this too became a little too dense for me to easily follow. The idea that some planets want to trade people as commodities, essentially, while others want to allow their workers some degree of freedom to choose their assignments – this would have a good place to end, for me.

One element I did appreciate was the bond between Dorsai men. Of course they were prepared to fight and kill one another when finding themselves on opposite sides. But in the abduction mission near the end of the story, Donal, El Man, and Ian wind up fighting and subduing a fellow Dorsai. He surrenders and they “hire him out” as a prisoner (an interesting if not immediately clear idea). He then takes them as far into the base as his honor will allow without directly betraying his commander.

Again, on the whole I found this an enjoyable read. But ultimately it felt like Dickson got too ambitious and got in his own way. He spent too much time on half-developed grand ideas that would have been better spent on further development of his characters.