As I go into a busy couple of work weeks before the holiday lull, I’ve been focusing most of my “game time” recently on Heroes of the Storm (with a little Dominions IV on weekends). For a long stretch I’d been sticking to Quick Match (casual play), but now something inside me has reawakened and I’ve been jumping back into ranked. Perhaps it’s the changing meta or watching pro and semi-pro games online that have whetted my appetite.

Side note: it’s a little off-putting that so many people don’t know how to properly pronounce “aegis.” With the last few hero releases, the meta (that is, the popular play style and character picks) have definitely come to revolve more around mobility and lockdown. Varian, for example, may not have a super high win rate right now (mysteriously), but he’s incredibly difficult to fight against. That short cooldown stun and dash plus his solid damage mitigation make him a high threat in both solo lane dueling and team fights. Keep your distance or you’re likely to get chunked or erased.

Luckily I haven’t seen a whole lot of Varian in Team League. Unluckily, this is because there are a bunch of other characters who are dominating the scene at the moment and can be incredibly frustrating to play against.

Chen is not one of these, and yet strangely the only two games my team won last night were games in which I went with the Pandaran asshole.

At any rate, I hear the ranked system will undergo an overhaul for season 3, and I’m looking forward to it. Should make Team League a lot more accessible once again.

In other news, I finished up with the Hand of Oberon last night. Onto the Courts of Chaos. I won’t include any spoilers here, but the Amber books do a very nice job of ladling out the intrigue and reveals in never-quite-satiating portions, leaving you always wanting to know more about the setting or the family or who’s plotting to kill who.

I’ve also stuffed Fritz Leiber’s Gather, Darkness! into my bag as train reading material. I’m about 40 pages in and so far it’s not really up my alley. Major, organized religions as the bad guys and bad guys as the actual good guys are not usually tropes I enjoy, and we seem to have both going on here. Still, it’s a short book so I’ll power through it and see if something changes my mind. 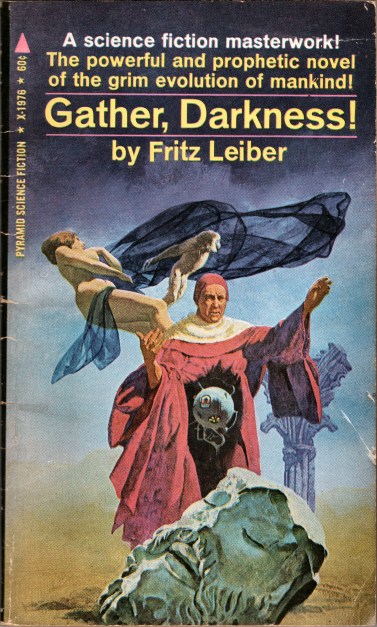 Closing thought: I wonder if the scarlet priests were an inspiration for the Forgotten Realms red wizards, visually at the very least.